Of late, Beachy Head has had a remarkable series of events involving rare Harriers. With both the Montagu’s and Pallid Harriers occurring within 2 days of each other and both being initially discovered whilst out cycling without optics.

At 16.50hrs on the 17th I was cycling past the set aside field at Birling Gap when I noticed an immature/female harrier with warm saturated underparts quartering the field. The bird was observed briefly, from a moving bicycle & without optics, as it disappeared towards Cornish Farm. I logically assumed it to be the reappearance of the very elusive Montagu’s Harrier, which had been present since the 7th and was last seen on 15th. I sent a tweet, called Roger Charlwood then continued the ride, arriving back home at dusk. Later that evening I received an email from Derek Hales a local birder/photographer who had been photographing the Harrier I had found earlier at Birling Gap. His email began “Did you know the Montagu’s is ringed?” There had been no rings visible on the Montagu’s so with great interest I looked closely at the images, simultaneously sharing them on WhatsApp with local birders. It quickly became apparent to me the bird in the images was not only a different individual to the recent Montagu’s but it was also showing Pallid Harrier features. I spoke to Chris Ball who had similar thoughts and with Jamie Partridge who also expressed agreement.

With building excitement and a little anxiety some late evening phone calls were made and at dawn the following morning I was above Belle Tout wood overlooking the set aside field. Just after 8am and fortuitously after the arrival of other local birders, the Pallid Harrier appeared,  showing excellently. It continued to be seen, latterly from the Old trapping area, up until approx. 10.30hrs. It gained height on at least one occasion shortly before disappearing below the cliff edge.

With the spectre of Hen x Pallid hybrids a real possibility in the UK, great caution was taken whilst putting out news. Especially as this bird exhibited initially confusing intermediate features of both adult and superficially juvenile characteristics. Although once the age was established (2nd calendar year female) the whole jigsaw fell into place.

Not only did Beachy Heads first & much anticipated Pallid Harrier follow hot on the heels of my first Montagu’s Harrier for the site, it was also sporting a davic ring! The birds history was available by late morning thanks to the work of Josh Jones. I’d also like to thank Roni Vasainen, Phil Saunders, Derek Hales and Mark Thomas.

The bird was ringed in June 2018 as a chick at Tyrnävä (northern Finland, close to Oulu) by Ari-Pekka Auvinen. Who has ringed most of the Pallid Harriers in Finland. Remarkable!

The wind had been light NE on the 17th and 18th with a high pressure sat close to the UK extending into the low countries and Eastern Europe. The days preceding that had light SE feeder winds off that high pressure into southern Britain. This was one of several good birds to be found along the south coast during that period.

The birds age (2CY) gave it a much more subtle appearance about the head than would be expected on a 1CY. Although the underparts are still richly coloured as in 1CY.

The bird had retained a subtle impression of the classic, juvenile Pallid Harrier head pattern. 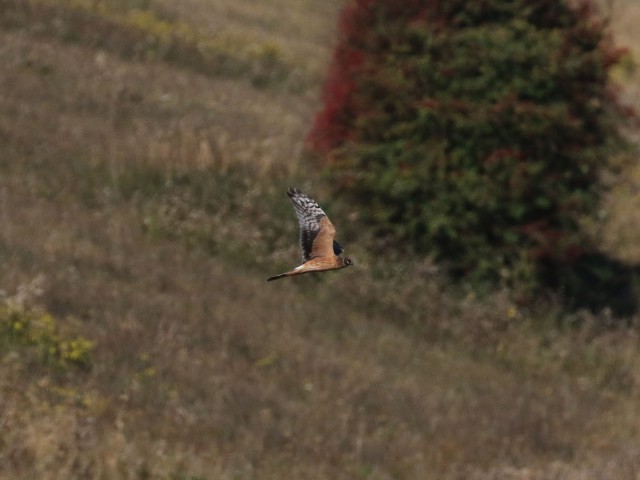