“It’s about the stories not the tertail tips“

At the point of writing it’s fair to say Scilly didn’t have a classic autumn and save an outstanding 90th minute goal it will probably be remembered as quite mediocre. Although by now it’s become very much a labour of love for myself and fellow house mates, “Lucky” Lee Amery, Scilly resident Graham Gordon, Jamie “Gull man” Partridge and last minute sub Paul “The Swedish Farmer” Cook.

Despite it’s overall poor performance it kicked off with an amazing pelagic and the quiet spells were punctuated by a Red backed Shrike & Little Bunting found by the Wright Twins, Grahams  flyover Glossy Ibis, a Bluethroat Paul found whilst Jamie turned up a Common Rosefinch & Wryneck. I too enjoyed some very fortunate bird finding highs in the shape of a Greenish Warbler, Red throated Pipit and co-finding the Grey cheeked Thrush with Graham. 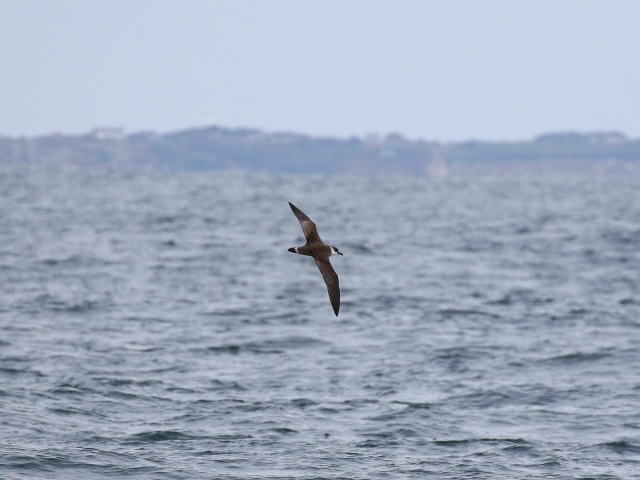 Part of the Great Shearwater rafts.

An outstanding pelagic aboard the Sapphire produced c100 Great Shearwater, small numbers of Manx, Sooty and Balearic Shearwaters. In addition to that came many close encounters with several pods of Common Dolphin and a brief Minke Whale. JP also managed to weed out two Yellow-legged Gull from the chaff, much to the disinterest of most on board! 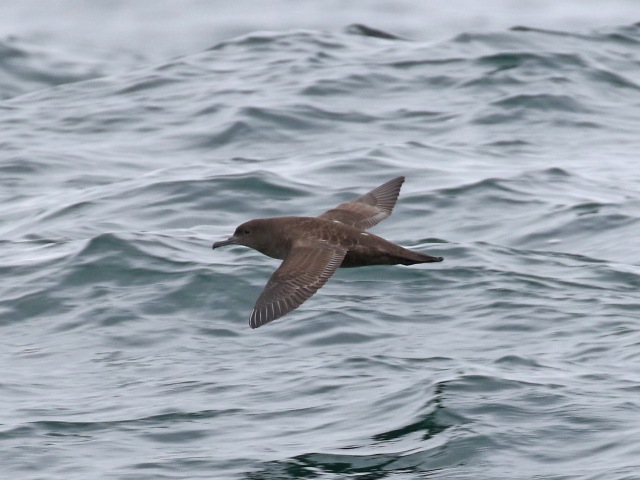 One of Jamie’s Yellow legged Gull on the Western Rocks.

The first bit of excitement I was responsible for came on the 8th October. Whilst standing in the Island Fields at Browarth with JP and David Bradshaw a call was heard, loudly and seemingly overhead that superficially sounded like a Pipit/Wagtail. Jamie headed out into the open area around the pool as I remained in the field, about 30 seconds later I heard the call again, this time sounding more metallic and very Pied Wagtail like whilst simultaneously noticing a small warbler sp. flycatching from the edge of the pittosporum hedge. I raised my bins to find a small wing barred phyllosc. which, combined with the call made the ID fairly straight forward, Greenish Warbler! The bird fed actively and performed for a quickly assembling crowd. Later moving to Porthkillier then into the Parsonage until departing overnight on the 14th. 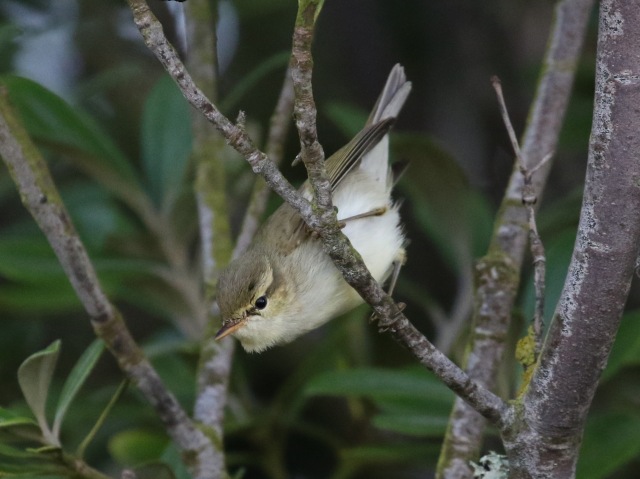 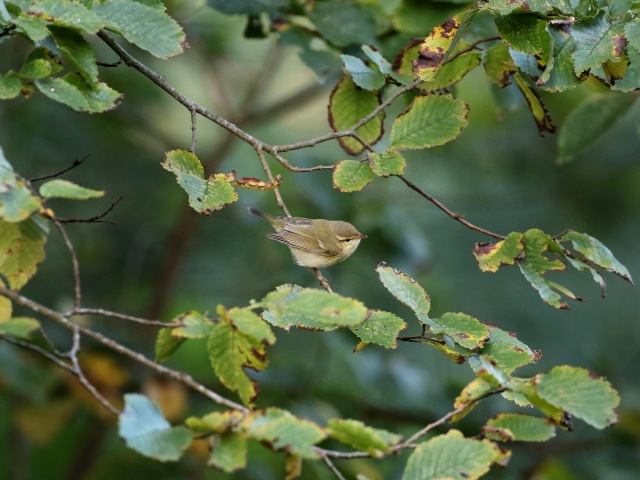 Above, in the yellowing Elms of the Parsonage. 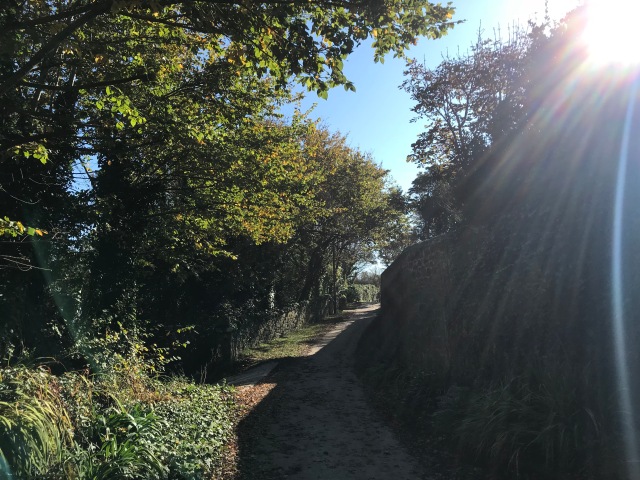 In a continuing a run of serendipity and less then an hour after the Greenish Warbler, I had returned to Island Fields with my camera in the hope of getting some images of the Greenish Warbler. Whilst I was just nearing Porthcoose I heard the distinctive call of a Red throated Pipit, slightly distantly but as the bird continued to call I could see a small group of c12 Pipits arriving from the north, I pointed skyward at the flock and shouted “Red throated Pipit” to anyone within earshot. Fortuitously the birds dropped daintily on to the beach where within seconds Neil Wright and I gingerly crept up on to the bank and scanned the flock. The bird was a very well marked individual standing out markedly against the accompanying Meadow Pipit It had also retained a slight peachy hue to the throat and, to a lesser extent, the face. Unfortunately the bird was slightly distant and all the images below are heavily cropped. 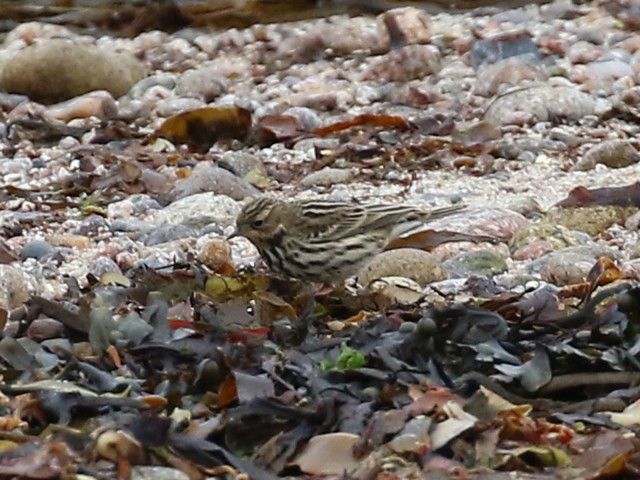 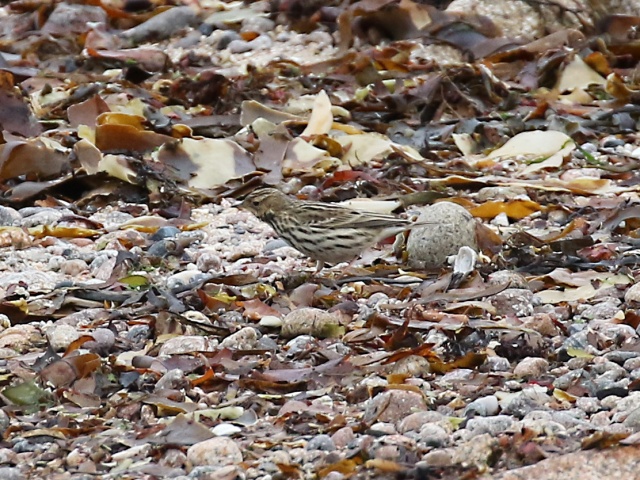 Despite some very encouraging forecasts and a battering from storm Callum (which in my view delivered the Catbird to Lands End) Scilly failed to shine. Callum was followed by fast moving, smaller system, which on the 16th draped fronts from NW Scotland, Ireland into the South West approaches to Scilly and seemingly associated with the discovery of American land birds on Barra, and on Cape Clear on the 17th. It was with some frustration I found myself kicking my heels and fearing the worst that Scilly had been passed over once again… but that was about to change. Graham Gordon and I had decided to spend the fading hours of the 17th in the Covean area, we worked our way through some private fields that Graham has access to and by 17.30hrs had made our way to the to the small boat shed at the cove. As we walked through a gap in the hedge a medium sized passerine darted into the hedge about 4/5 meters ahead of us. The size of the bird didn’t quite fit Blackcap nor Song Thrush and having a slightly better aspect on the bird than Graham I excitedly blurted out that the bird had a stripped underwing, we were both clear in our minds what this meant, there were few options on the table beyond a Catharus Thrush sp. Expectantly we took a side of the hedge each confident one of us should see the bird again if we waited. Almost immediately the bird dropped on to the path in front of GKG and his words were “Fuck me. It’s a Grey cheeked Thrush Laurence… it’s here… right in front of me!”. Quickly changing position, I was beaten by the bird which dropped on the beach side of the path out of sight. Although seconds later flying back past us towards the sycamores… We quickly spread the news but not before a joyous embrace and a bit of jumping up and down! The bird proved a real challenge to see let alone photograph and the below image belongs to Steve Rowe who kindly allowed me to reproduce it here. I did see it well the following day but it spent most of its time hopping about like a Pitta in the shadows beneath the Pittosporum.

This is the chart 24hrs prior to the discovering of the Agnes Grey cheeked Thrush, the Cork Veery and the Baltimore Oriole on the Hebrides. Long draping fronts trailing from what was a fast moving depression, the centre of which headed north of the UK. It illustrates once again warm fronts are instrumental and perhaps the only predictable constant, when it comes to trying to interpreting the potential of transatlantic weather. The fact Hurricane Michael stalled before reaching the UK was very unfortunate, considering the birds it delivered to the Azores.

Finding an American land bird in the UK is a massive thrill and sharing it with an old friend was a great moment. Scilly, although it may have it’s neigh sayers, is still the best location for UK birders aspiring to mine for transatlantic gold. I also managed to squeeze in a quick meow from the Lands End Catbird before getting the train back from Penzance on the 21st. 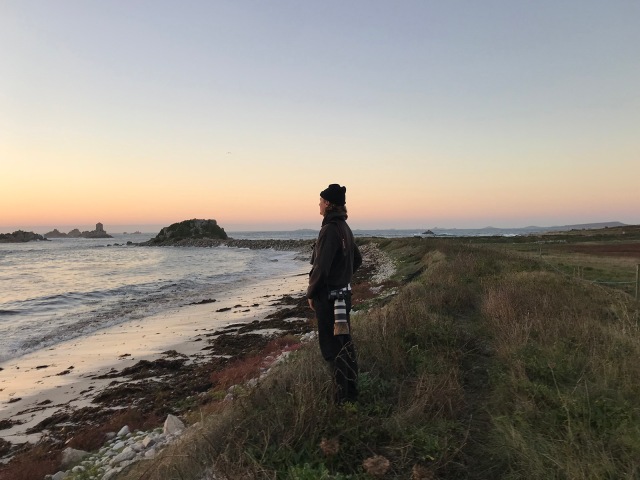 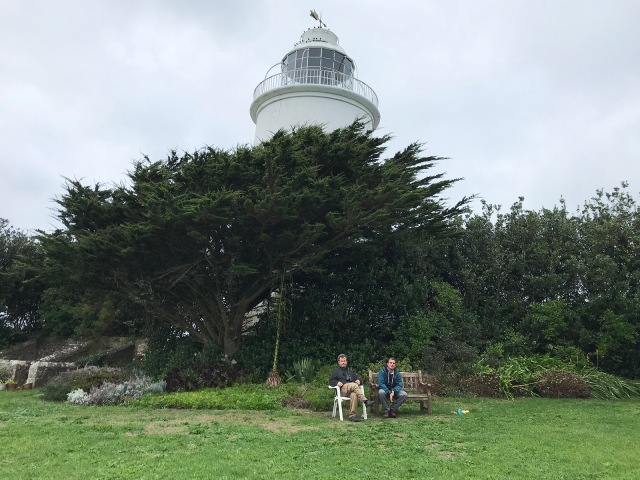 Graham and Lee in the Lighthouse garden taking afternoon tea.

Paul, me and Graham.

GKG ploughing his own furrow.