An interesting weather day with a SE wind switching SW by mid afternoon, frequent heavy showers becoming dryer later. The days highlight was the discovery of a Wryneck, opening Beachy Heads autumn account for this scarce, autumnal species. I spent an hour or so trying to photograph this ridiculously shy Wryneck in Shooters Bottom, which would fly to cover at the slightest sign of movement! Lets hope some more eastern drift migrants make it to the south coast over the coming days, although the forecast is looking fairly torrential and may hamper efforts to discover any that do make it. 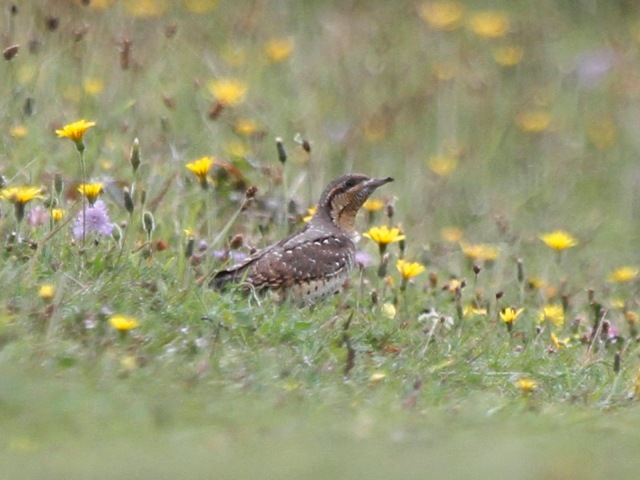 The amount of migrants on the east coast of the UK was motivation to stay out searching and there was enough activity to sustain the effort. Most of the time was spent in Shooters Bottom with a look at the Belle Tout area late on. Day totals were; 3/4 Spotted Flycatcher, 3 Redstart, 4 Reed Warbler, 50+ Common Whitethroat, 5 Lesser Whitethroat, 4 Blackcap, 1 Garden Warbler, 10 Willow Warbler, 1 Hobby, 35+ Swift, 1 Tree Pipit. Blackcaps now beginning to appear as we approach September. A single Chaffinch which have been notable by their absence of late, despite being a conspicuous breeder. In a similar vein Skylarks to seem to be silent and much reduced in numbers on the headland following a lot of breeding activity.

Birder
View all posts by BEACHY BIRDER →
This entry was posted in Uncategorized and tagged Beachy head birding, wryneck. Bookmark the permalink.